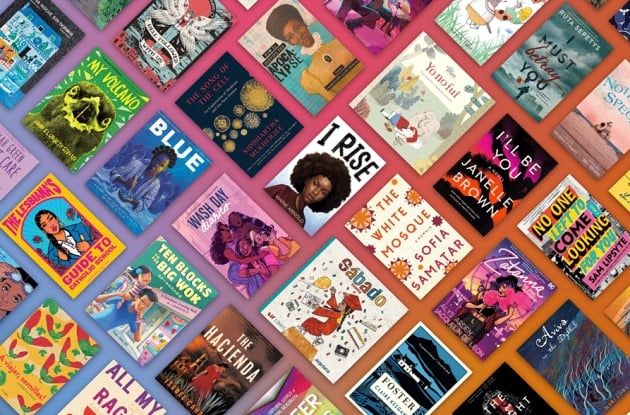 NYPL Announces Best Books of 2022 for Kids and Teens

The New York Public Library recently announced its picks for the best books for kids and teens that were published in 2022—here's a selection.


Bree winds up on the swim team even though she can't swim. It will take determination, a new community of friends and a few history lessons to keep her head above water.

9. Ten Blocks to the Big Wok: A Chinatown Counting Book

Told in Mandarin and English with soft watercolor illustrations. Mia and Uncle Eddy walk through Chinatown counting the cultural items in their community that embody a Chinese-American experience.

Wednesday and her support dog, Woof, run a detective agency in their backyard. When Wednesday’s operatic neighbor’s cat disappears, the detectives are on the case.

The NYPL included 50 titles in its top books of 2022 for teens list (you can check them all out on the NYPL’s website), but here’s a selection of the top 10 in alphabetical order.

By Sabaa Tahir
Ages: 14 and older

Two teens persevere through loss, trauma, and Islamophobia in their California desert town.

2. Hell Followed with Us

Benji is a trans teen on the run from the cult that raised him and caused the apocalypse. After he's saved by teens from a LGBTQ+ youth center, he works with the center's leader Nick, an autistic boy with deadly aim, to fight back.

3. I Must Betray You

By Ruta Sepetys
Ages: 12 and older

In 1989 Romania, Cristian is forced to become an informer for the tyrannical dictatorship that rules the country with an iron grip.

By Marie Arnold
Ages: 12 and older

14-year-old Ayo has to decide whether to take on her mom's activist role. Trying to find answers, she looks to the wisdom of her ancestors and her Harlem community for guidance.

5. Messy Roots: A Graphic Memoir of a Wuhanese American

Laura Gao paints a visual love letter to her first home—Wuhan, China—as she discovers her own different layers.

6. Queer Ducks (and Other Animals): The Natural World of Animal Sexuality

By Eliot Schrefer; Illustrated by Jules Zuckerberg
Ages: 14 and older

A look into the diverse queer behavior in the animal world.

7. So This is Ever After

Arek has saved the Kingdom of Ere from its evil ruler. Now stuck as king, he discovers that magic requires him to find a bride before his 18th birthday or wither away. None of his female companions are interested, but there's only one person he's attracted to anyway—Matt, an aspiring wizard and his best friend.

8. The Lesbiana's Guide to Catholic School

By Sonora Reyes
Ages: 13 and older

Yami is scared to come out after she falls for her ex-best friend. Now she's in Catholic school trying to look out for her little brother. All she can think is, “What would a straight girl do?”

9. The Weight of Blood

Maddy is revealed to be biracial. Her school becomes notorious for a string of racist incidents, leading it to host its first, yet ill-fated, integrated prom. What happened that night? All anyone can agree on is that Maddy did it.

10. Zatanna: The Jewel of Gravesend

Zatanna lives in Coney Island's Luna Park with a giant pet bunny and world-famous magician dad. After a magic show goes wrong, she gets entangled in a dangerous rivalry.

The Brookland Fairies, a children's birthday party planning company based in Manhattan, will release the first book in its new fairy tale series. The ...

Here are some local Halloween stores in NYC, Long Island, and Westchester County, NY, where you can find decorations, costumes, and everything else yo...

New Rochelle, NY At Pediatric Associates of Southern Westchester, we are committed to providing quality, comprehensive healthcare for your child.